Welcome to the OFL!

Rulebook for contact tag American gridiron touch football. Up to 11 a side. 75 pace field (plus end zones). Pick-up football fun based in Cambridge MA. 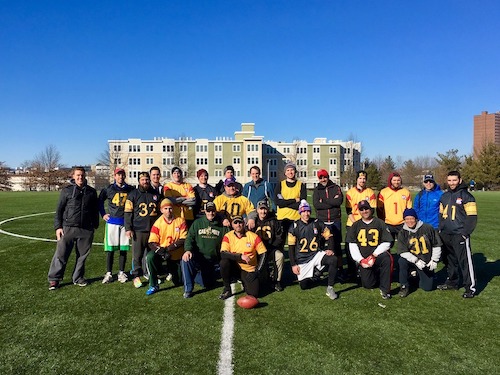 This rulebook for gridiron touch football has been created with the hope of creating a great playing experience which looks and feels much more like the football you see on TV than does traditional flag or touch rules. These rules work very well and if you've found this site and are based outside of the Boston area we invite you to give them a try with your own league or pick-up games. Groups from D.C. to California have had success using OFL rules.

OFL ("Our Football League") is a long-running (25+ years) touch (contact tag) American football club based in Cambridge, Massachusetts. It is organized and run by Shaun Wortis.

We kick off every Sunday morning, mid-September through the Super Bowl in February. If you'd like to play, please contact Shaun Wortis (the Commissioner) by emailing Commissioner @ this web domain.

There are two 45 minute halves and the clock runs generally without stoppages, except for injuries etc, similar to a rugby game. We typically end at around 12:00PM.

The short answer: Any adult. But:

The mission of OFL is to have as much fun as one can have on a freezing December (January.. February..) Sunday morning in New England, or wherever you are. All of us believe that playing football is really fun.

We play in all weather (except lightning storms) most every Sunday, mid-September through the Super Bowl, typically in early February.

OFL rules are designed to establish fair play, as easy to self-referee as possible, especially considering the diversity of sizes, ages, strengths, and experience of players. That said, the rules are really guidelines. We are not interested in the microscopic analysis of each play that, in my opinion, hurts big-league American football. Our ethos is much more similar to rugby: Tough guys playing a fluid and continuous gentlemen's game.

I would much rather that all disputes be settled by consensus. However, since football can be a physical game, it's necessary that players respect the ultimate authority of the Commissioner or whoever is "refereeing" the game. Basically, in the end, what the ref says goes. If you think it was a touchdown and the ref thinks not, it's not. Period. Otherwise, things can get ugly which is just plain not fun. And fun is the whole damn point.